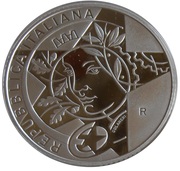 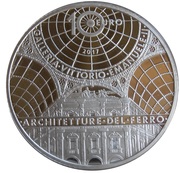 Face representing Italy encircled by a five-pointed star with details from the coat of arms of the Italian Republic: a cogwheel, oak and olive branches; above, between two points of the star, a towered crown; below the logo of the Europa Star programme.

View of the Galleria Vittorio Emanuele II in Milan by architect Giuseppe Mengoni specially focused on the cast-iron dome.

The Europe Star Programme is a voluntary, common initiative of the issuing authorities of EU member countries. Since 2004, many countries have participated in the programme, issuing legal tender coins in precious metals, dedicated to a common subject that celebrates European identity.

Cast-iron architecture flourished in Europe between the end of the 19th and the beginning of the 20th century, especially in France, England and Italy, where the most representative building is the Galleria Vittorio Emanuele II in Milan.
The Gallery, designed in Neo-Renaissance style by architect Giuseppe Mengoni, strikes a perfect balance between the modern cast-iron and glass roof and the precious, refined decorations. 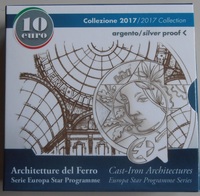 Bullion value: USD 15.81 Search tips
This value is given for information purpose only. It is based on a price of silver at 777 USD/kg. Numista does not buy or sell coins or metal.