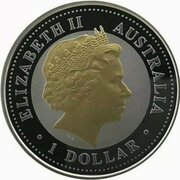 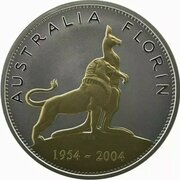 This Fine Silver (.999) coin was issued in 2004 by the Perth Mint to commemorate the 50th anniversary of Her Majesty Queen Elizabeth II's tour of Australia in 1954. The coin reproduces the reverse design of the historic 1954 Royal Visit commemorative circulating florin, with a British lion and Australian kangaroo standing side by side.
One troy ounce of 99.9% pure silver with selective 24-carat gilding.
The coin came housed in a special flag-shaped case. 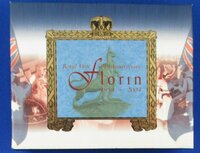