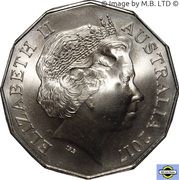 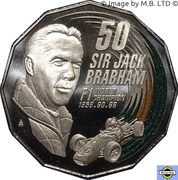 This NCLT 50 cent coin was released by the RAM in 2017 in a coin card to commemorate the motor racing achievements and life of the late Sir Jack Brabham AO OBE.

The story of the three-time Formula One World Champion is one of the brightest chapters in Australian motorsport history. Fifty years on from the prestigious achievement of winning the Formula One World Driver's Championship and being named the Formula One World Constructor's Champion in the same year (1966), the RAM commemorates the life of Sir Jack Brabham on this 50 cent coin. Sir Jack's legacy of passion and commitment towards motorsport has continued to inspire people globally with his driving skills, engineering vision and endearing demeanour that will never be forgotton.