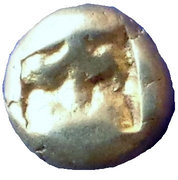 Some more informations about the Majapahit Empire see link

THE JAVANESE GOLD MASSA OF 5 RATTI FROM DAHA/DJENGGALA PERIOD !!

The earliest Javanese coins identified to date appear to have been minted at the end of the eight century or at the beginning of the ninth century AD. They were minted in Mataram, the first large state on the island. This state had been created during the middle years of the eight century, when a medium-sized state located in the interior of Central Java annexed the old trading state, known to the Chinese as Ho-ling.
This enlarged state continued to absorb its smaller neighbours, and by the end of the ninth century it had also managed to attach in some manner the relatively substantial state located in the Berantas river delta region of East Java. In the year 929 AD a combination of volcanic eruptions in south central Java and the increasing wealth of the Berantas delta ports in East Java precipitated a shift of the state from Central to East Java .......
For the further informations please see "A Preliminary Survey of Early Javanese Coinage Held in Javanese Collections, by Prof. Jan Wisseman Christie.
In the late thirteenth to early fourteenth centuries, the Chinese cash coins were imported in a greater number, that they had taken over from the gold and silver coins as the official currency of the Majapahit Kingdom (1293-1522 AD) in East Java. The import of Chinese cash was interrupted from the early fifteenth century, when Chinese Ming administration closed down its foreign trade. Cash coins also imported into Java from Vietnam and Japan, when Chinese supplies dried up. In the fourteenth century, there were also some local production of cash coins. Brass cash from Qing Dynasty, were imported into Java and Bali by Dutch and Chinese traders until the twentieth century.
This is a Beautiful Gold (One) Massa coin called MASSA , struck and circulated in Java during the tenth to the eleventh centuries, during the Javanese Daha and Djenggala Period, but commonly called "Majapahit Money". Devanagari character 'Ta' on Obverse, an abbreviation of "Tahil". The coin is more stylish than the earlier from Cailendra period. Round shape.
The standard weight of "MASSA" is 20 RATTI (=2,4gram).
Here its 1/4 Massa = 5 RATTI (=0,6gram).