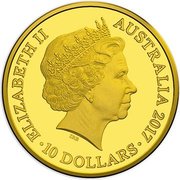 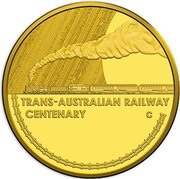 Image of a Steam Engine and Carriages travelling right to left with large plume of smoke. Railway tracks in a semi-circle in lower half of the coin

This NCLT coin which commemorates 100 years of the Trans-Australian Railway was issued by the RAM in Gold Proof finish.

Crossing the wide brown land of Australia was an insurmountable task 100 years ago. With challenges for transport, freight and communication, the east and west coasts were divided by more than distance. The Trans-Australian Railway line, completed in 1917, united the young nation after federation like never before.

Bullion value: 157.83 USD Search tips
This value is given for information purpose only. It is based on a price of gold at 50,867 USD/kg. Numista does not buy or sell coins or metal.