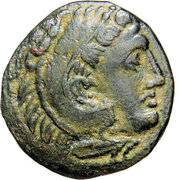 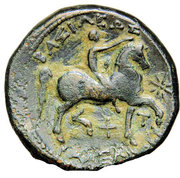 Head of Heracles right, clad in lion-skin knotted at base under the chin.

Young boy, on horse marching right, crowning the horse with his right hand.
Lettering above and below horse; sometimes, a monogram between horses legs or in field.

Strike is placed after -305 thanks to the lettering mentioning the title king, Cassander becoming king in -305.

This coin appears to have been struck by mints of Amphipolis or Pella.

Members from this site want to exchange it: CoinMatt, nst15, tsoun

» Buy coins from the Kingdom of Macedonia