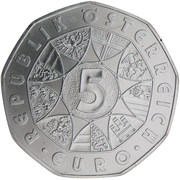 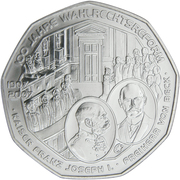 The design is based on an historic photo of the opening session of Parliament after the 1907 elections. It shows the government bench at the front of the chamber with two officials at the desks above. Opposite stand some of the newly elected members of the House. The two oval portraits in the foreground commemorate the Emperor Franz Joseph and Max Wladimir von Beck, who were chiefly responsible for putting the reform through. The small symbol of the "€" and star for Europe marks this coin as part of the international series "European Achievements".

Bullion value: 7.28 USD Search tips
This value is given for information purpose only. It is based on a price of silver at 910 USD/kg. Numista does not buy or sell coins or metal.