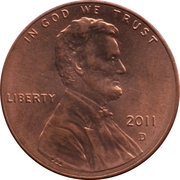 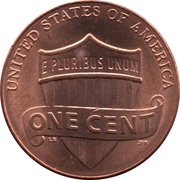 Ribbon bearing value on top of the shield

Translation:
United States of America
Out of Many, One
One Cent
LB JFM

Lyndall Bass (born July 5, 1952) is an American realist painter and teacher known for her design of the 2010 penny known as the Union Shield Penny.