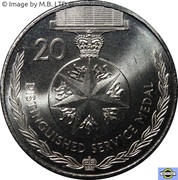 This particular 20 cent coin refers to the Distinguished Service medal which is awarded to members of the Australian Defence Force who demonstrate distinguished leadership in warlike operations. Introduced in 1991, it is the second highest distinguished service decoration in the Australian honours system and has been awarded 158 times.