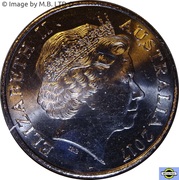 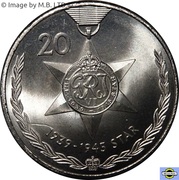 This particular 20 cent coin refers to the 1939 - 1945 Star medal which was awarded to all members of the British & Commonwealth forces who completed 180 days of operational flying during the Second World War. Two clasps could be worn on the medal ribbon: the Battle of Britain Clasp and the Bomber Command Clasp. Merchant Navy sailors also qualified if they served in certain theatres of war. More than 520,000 Australians received the medal.