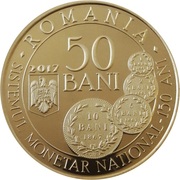 The portrait of king Carol I, the arc inscriptions “CAROL I” and “1867” – the year when the law establishing the national monetary system was enacted.

“ROMANIA” inscribed twice, with an asterisk separating the inscriptions

Members from this site want to exchange it: scrabblist, dodolino61