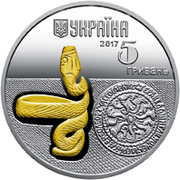 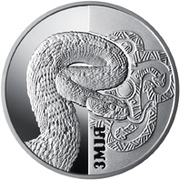 Fauna in Cultural Monuments of Ukraine

Above are Ukraine's small coat of arms, the legend УКРАЇНА (Ukraine), the coin issue year 2017 and the coin face value 5/ ГРИВЕНЬ (5/hryvnias); in the center is a gilt ring in the shape of a snake (second-third centuries AD) found in the ancient town of Tyras (the modern town of Bilhorod-Dnistrovskyi), to the right of which is a double-sided medallion, which was worn on the neck (12th century AD). Such medallions were very popular in Kyiv Rus. They were used as protective amulets, featuring a Christian motif on one side and the Medusa`s head on the other side.

There is an image of a snake against the background of Trypillian ceramics in the shape of snakes. Beneath the ceramics is the vertical legend ЗМІЯ (snake).

This coin celebrates the snake and its representations in cultural monuments from various times. The tribes and peoples that inhabited Ukrainian lands for thousands of years have created countless works of art. Priceless cultural monuments from various periods in history tells us how ancient people learned to work with natural materials, and to make them powerful by using symbols - representations of birds, animals, people and ornaments, etc. The image of the snake plays a prominent role in the ornaments of Trypillian ceramics. In Trypillian culture, snakes were seen as benevolent, and the protectors of domestic property.

Members from this site want to exchange it: raric, MAG-903

Bullion value: 14.00 USD Search tips
This value is given for information purpose only. It is based on a price of silver at 894 USD/kg. Numista does not buy or sell coins or metal.