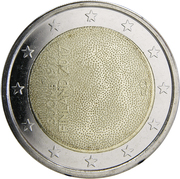 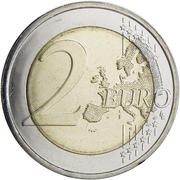 The inner part of the coin has a mosaic design, with the more sparsely set pieces on the right forming a cartographic likeness of Finland. The text ‘SUOMI FINLAND’, the year of independence ‘1917’ and the year of issuance ‘2017’ are placed vertically one below another at the left. In the middle right is the indication of the issuing country ‘FI’ and the mintmark. The coin’s outer ring bears the 12 stars of the European Union.