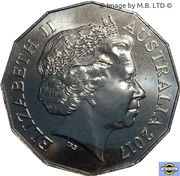 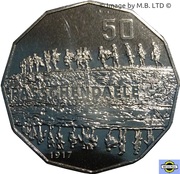 The Royal Australian Mint is producing a series of NCLT 50 cent coins to commemorate the Battles of the Western Front that Australian soldiers took a major part in during WW1. They are released on a coin card.

This 2017 coin relates to the military efforts at Passchendaele. Throughout September and October of 1917, Australian troops participated in the British offensive known as the Third Battle of Ypres, which sought to capture the village of Passchendaale in Belgium and advance to the coast. The Australians fought costly but successful actions at Menin Road, Polygon Wood and Broodseinde Ridge, all of which were well supported by artillery. Heavy rain soon turned the shell-torn and low lying landscape into a quagmire, impeding any further progress. Australian efforts to capture Passchendaele ultimately failed dismally, and resulted in catastrophic losses. The Australians suffered 38,000 casualties - their greatest losses of the war.