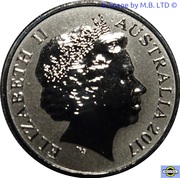 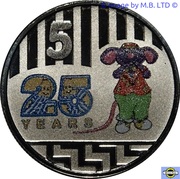 Depiction of the two Bananas & the Rat in a Hat

This NCLT release by the Royal Australian Mint is Australia's first ever coloured 5 cent coin. It is part of a two coin set and has been paired up with a coloured 20 cent coin. Both coins commemorate 25 years of the "Bananas in Pyjamas" segment of the Australian children's television series "Play School". The two coins are frosted uncirculated and are packaged in coin capsules that are placed in a children's book type folder.

The coin was also included in a 2 coin PNC released by Australia Post.

The was coin included in a different coloured limited edition 2 coin PNC at the ANDA Melbourne Money Expo.