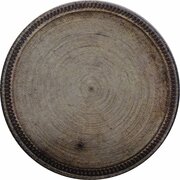 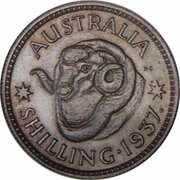 Machined off, originally had the portrait of King Edward VIII

The 1937 Shilling coin was a pattern which was never released. It was struck at the Royal Mint in London. The existing coins are all uniface. It is thought that - if they had the effigy and legend of Edward VIII - those were then machined off to leave the obverse blank.

According to The Australian Coin Chart 1966 "A few Pattern Shillings dated 1919 and 1937 have been reported and would realise over £500 at Auction". (Currently would probably fetch many thousands of dollars.)

Bullion value: 4.16 USD Search tips
This value is given for information purpose only. It is based on a price of silver at 796 USD/kg. Numista does not buy or sell coins or metal.