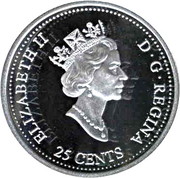 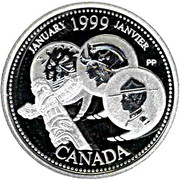 Series: CAN:The History of Canada Through the Second Millennium

A design entitled "A Country Unfolds" shows the evolution of Canada through four scenes, which form the number 1999 : a totem, an indigenous wearing a feather hat, a settler and RCMP officer, all surrounded with the inscription "CANADA" and the bilingual date: "January 1999"

A member of this site wants to exchange it: malaim

This value is given for information purpose only. It is based on a price of silver at 761 USD/kg. Numista does not buy or sell coins or metal.