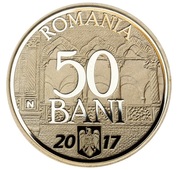 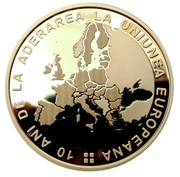 10 years since Romania’s accession to the European Union

A composition containing details of the Brâncovenesc architectural style, the inscription “ROMANIA” in an arc, the face value “50 BANI”, the coat of arms of Romania and the year of issue “2017”.

Translation: 10 YEARS SINCE ACCESSION TO THE EUROPEAN UNION

“ROMANIA” inscribed twice, with an asterisk separating the inscriptions

Letter “N” inscribed on the base of the first column, as a distinctive sign of the collector coin (the proof coin).
The "N" is missing from the regular circulation coin.