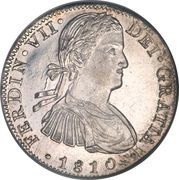 Translation: Fernando 7th by the grace of God

Shield w/4 part crest. Castles and Lions on Diagonal.
columns on both sides of shield and crown on top of the shield. Ribbon flowing on columns with letering.

Alternating Squares and circles all around edge.

Different mint varieties are considered different coins due to the way they were made, they were often made on top of other coins, and also were copies rather than shared dies, made by Loyalists.

Members from this site want to exchange it: harryg, German_empire5_mark_fan

This value is given for information purpose only. It is based on a price of silver at 761 USD/kg. Numista does not buy or sell coins or metal.