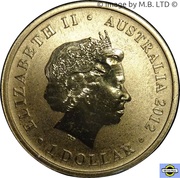 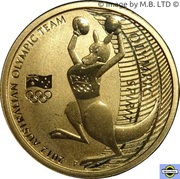 Features a representation of the Australian Olympic Team's mascot, the boxing kangaroo, against the words OLYMPIC SPIRIT. The design includes the Official Team Logo and the inscription 2012 AUSTRALIAN OLYMPIC TEAM.

Issued in conjunction with Australia Post as a PNC.

Also issued in a 5 coin folder with four other Olympic themed $1 coins.