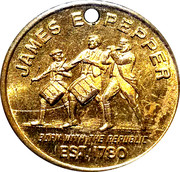 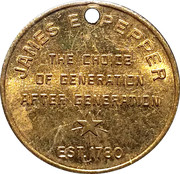 James Pepper of Lexington, Kentucky, claimed that his whiskey could be dated to the year 1780,  smack in the midst of the American Revolutionary War.   His grandfather, Elijah Pepper, sometimes was credited with beginning the first distillery in Kentucky,  a claim that might have been disputed by others but never by his grandson.   As a result, as shown below,  Pepper’s merchandising, including signs, trays and tokens, that stress the Nation’s first war.  http://pre-prowhiskeymen.blogspot.com/2012/09/james-e-pepper-was-his-whiskey.html

A member of this site wants to exchange this coin: sch1tz0.cg13