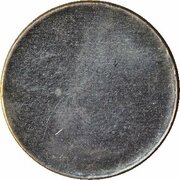 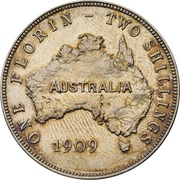 Image of the Australia continent

The die for this coin was prepared by the Royal Mint and one uniface trial piece was struck. The trial piece and the die are still in the possession of the Royal Mint. From the trial specimen two electrotypes were made, one for the Royal Australian Mint and one for the New South Wales Museum of Applied Science (now the Powerhouse Museum). One of those electrotypes was stolen from the Museum of Applied Science by David Gee in about 1970 and used to make a die. Later, Gee was able to steal a Sydney Mint Edward VII £2 obverse die from the Dixson Collection held by the NSW State Library and alter it to form an obverse for two double-sided counterfeit 1909 florins.