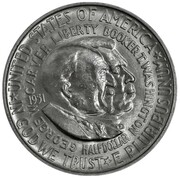 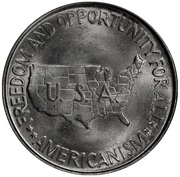 Lettering: *FREEDOM AND OPPORTUNITY FOR ALL* *AMERICANISM*ั

Part of the impetus for the approval of the final commemorative coin program seems to have been the intended purpose to “oppose the spread of Communism among Negroes in the interest of national defence.” Models for the design were prepared by Isaac Scott Hathaway, but both were initially rejected. The obverse featured a three quarter profile portrait of Booker T. Washington behind the profile portrait of George Washington Carver. The reverse featured the American Legion seal with inscriptions including “United Against the Spread of Communism”.

The revised and later approved models featured both portraits in profile, surrounded by lengthy inscriptions. On the reverse was a simple map of the United States of America, curiously with Delaware omitted.

Coins were issued in three-coin sets containing one of each mint mark for each year of issue. Prices were $9 or $10 per set, and later $12 per set for the 1954 coins. In 1952, there was some attempt to issue the coins broadly through banks, but many were eventually distributed at or near face value. By the end of the program, more than one million coins would be distributed.

For nearly three decades, no additional commemorative coins were approved within the United States. Any proposals were met by the Treasury Department with a long list of complaints that had arisen due to past abuses. Thus ended the era of early commemorative coins.

Bullion value: USD 7.35 Search tips
This value is given for information purpose only. It is based on a price of silver at 653 USD/kg. Numista does not buy or sell coins or metal.