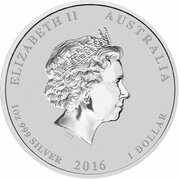 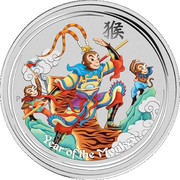 Year of the Monkey - Monkey King

Coloured image of the Monkey King on a chair against a backdrop of mountains and clouds, with two young monkeys

The Monkey King is brought to life in brilliant colour on this silver bullion coin. The legend of the Monkey King, Sun Wu Kong, is told in the Chinese novel Journey to the West. He is bold, daring, mischievous and rebellious.

Journey to the West is based on the monk Xuan Zang’s journey to India to retrieve Buddhist scriptures and follows the adventures, conflicts, and triumphs he has with the Monkey King and other pilgrims.

A member of this site wants to exchange it: mogollolandia

Bullion value: USD 24.16 Search tips
This value is given for information purpose only. It is based on a price of silver at 777 USD/kg. Numista does not buy or sell coins or metal.