Value above hole and signature of the mint official below

Smooth, paulownia stamps on the left and right side (various sizes and forms exist)

Officially only produced in the mints of Honza in Edo and Osaka, because it was profitable to make them. They were illegally cast in provincial mints like Satsuma, Mito, Fukuoka, Kochi, Yamaguchi, Aizu, Sendai, Akita and Morioka.
Official coins were cast with very fine sand from Bosho and have a smooth field, inofficial casts used a much coarser sand and have much more grainy fields.

After the establishment of the modern currency system this 100 mon coin was valued at only 8 rin. 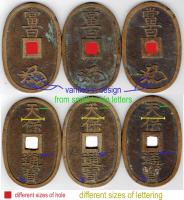