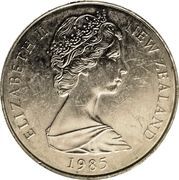 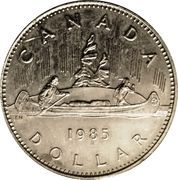 Two figures paddling a canoe right, legend above, date and denomination below.

Due to a mint error, these pieces were struck with the obverse die of a New Zealand 1985 50 cent (KM#37) and the reverse die of a Canada 1985 dollar (KM#120) - 6 specimens are known to exist. Krause & Mischler list the metal as nickel, which implies that the planchets were the type used for the Canada dollar.