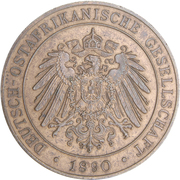 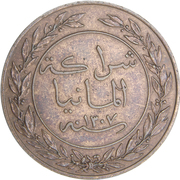 German eagle with crown above the head surrounded by lettering and date.

Arabic writing including date surrounded by a wreath.
Current lettering translates to "Germany Partnership", probably meant to be "Germany Company", hence first word should have been written as "شركة" instead of "شراكة"