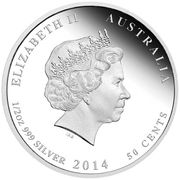 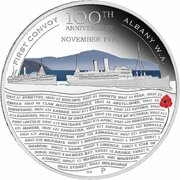 The coin’s reverse features two ships in the convoy as they set sail from King George's Sound in Albany, and a list of the 39 ships that sailed from Albany’s shores. The inscriptions FIRST CONVOY ALBANY W.A. and 100TH ANNIVERSARY NOVEMBER 1914, a red poppy motif, and The Perth Mint’s traditional ‘P’ mintmark are also incorporated into the design.

Only 1,914 coins produced to signify the year that WW1 Commenced.

Bullion value: 13.50 USD Search tips
This value is given for information purpose only. It is based on a price of silver at 867 USD/kg. Numista does not buy or sell coins or metal.