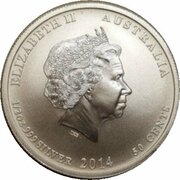 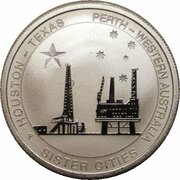 In 1984, the cities of Houston, Texas in the United States and Perth, Western Australia in Australia joined together in an official partnership as Sister Cities. The historical foundation for this partnership went much further back than 1984 however.

During the Battle of Sunda Strait in World War II, the USS Houston and HMAS Perth formed a joint American-Australian task force that attacked a superior Japanese naval force in hopes of delaying Japanese movements toward Australia. Both ships were sunk that day, but succeeded in stalling the Japanese Navy long enough for the American and Australian navies to regroup and halt the Japanese advance entirely.

On the reverse of these ½ oz Texas-Australia Sister Cities Silver Coins you’ll find an energy-themed design that features two distinctly different oil derricks. On the right is the typical offshore derrick you’ll find in the Gulf of Mexico off Houston’s coast, while the other represents the energy efforts of Australian firms in and around Perth.

Bullion value: 13.23 USD Search tips
This value is given for information purpose only. It is based on a price of silver at 849 USD/kg. Numista does not buy or sell coins or metal.