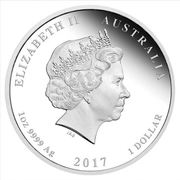 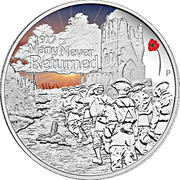 The coin’s reverse depicts a group of Australian soldiers as they walk through the Menin Gate, past the Cloth Hall, on their return to Ypres from the battlefields of the Ypres Salient. Red Poppy to top right.