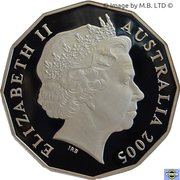 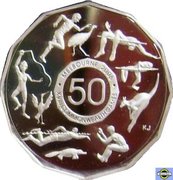 Depiction of animals mimicking athletes as they are competing in the Games. Symbolic of the embracing spirit of the Commonwealth Games and Australia's unique fauna

This Fine Silver (.999) Proof NCLT 50 cent coin was released by the RAM  in 2005 in a capsule in a plush blue box with limited edition certificate. This coin was designed by 16 year old Victorian 'Kelly Just' who won a nation-wide secondary school competition to design the reverse. 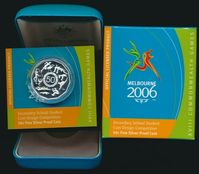 Over 20 million of this coin were released into circulation as a Copper-nickel coin. Just to confuse you the coin is dated 2005 on the obverse but features "Melbourne 2006 XVIII Commonwealth Games" on the reverse.

Bullion value: 15.13 USD Search tips
This value is given for information purpose only. It is based on a price of silver at 830 USD/kg. Numista does not buy or sell coins or metal.