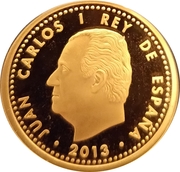 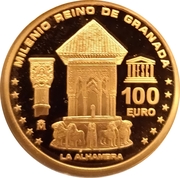 Portrait of S. M. the King of Spain, Don Juan Carlos I

The reverse shows the fountain and one of the pavilions of the Patio de los Leones, as well as the capital of a column of the Alhambra in Granada.

On the occasion of the celebration in 2013 of the first millennium of the creation of the Kingdom of Granada, the National Factory of Currency and Timbre-Real Casa de la Moneda has prepared an issue of collector coins. Called "Millennium Kingdom of Granada" and formed by two pieces, one of gold with facial of 100 euro and another of silver with facial of 10 euro, both minted with quality "proof".

Bullion value: 384.47 USD Search tips
This value is given for information purpose only. It is based on a price of gold at 57,016 USD/kg. Numista does not buy or sell coins or metal.