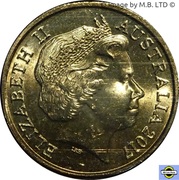 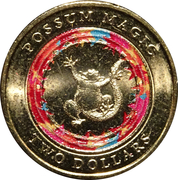 Hush happy at being visible again.
Surrounded by a mostly red coloured circle.
Text outside of the circle.

The Possum Magic Book was first published in 1983 and is a whimsical picture book written by Mem Fox about two possums, Grandma Poss and Baby Hush, and their travels around Australia sampling food in their quest to make Hush visible again after he was made invisible by the magic of Grandma Poss.
This particular $2 coin depicts "Hush happy and celebrating being visible again".