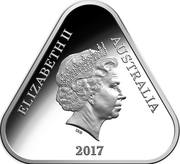 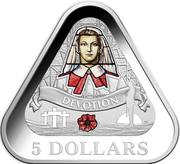 Portrait in colour from the Hall of Memory at the Australian War Memorial. lettering below

Fifth coin in a series of Triangular $5 coins released by the Royal Australian Mint. This coin remembers the Front Line Angels (Nurses & Medical Staff)who have served in all wars.

Bullion value: 19.05 USD Search tips
This value is given for information purpose only. It is based on a price of silver at 858 USD/kg. Numista does not buy or sell coins or metal.