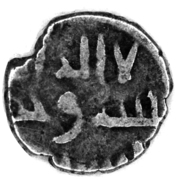 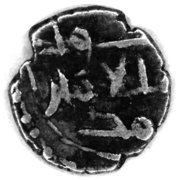 Translation: "There is no god but Allah alone. There are no others with Him. /

Translation: / Muhammad is the apostle of Allah. Amir Ahmad"

​Habbarids (Amirs of Sind), Ahmad
The Habbarids are one of the Islamic dynasties. They ruled Sind (lower Pakistan) in the early Islamic period. Amir means "commander" or "governor" in Arabic. The various Islamic dynasties are named after the founder of the family line. The Habbarids were Arabs, descendants of one Aziz al-Habbari. The Habbarids ruled from the 9th century, nominally on behalf of the 'Abbasid caliph of Baghdad though in practical terms they exercised defacto independence. Habbarid rule was ended in the early 11th century. Not a lot is known about the Habbarids. The sequence of rulers and their dates are not well understood.

A member of this site wants to exchange it: TuckHard

» Buy coins from the Habbari dynasty