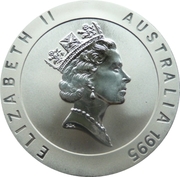 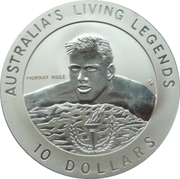 One from a set of six silver coins released by the RAM to celebrate the Olympic sporting achievements of some of Australia's best athletes, The coins were released in pairs, this one was paired with Dawn Fraser and was entitled "Australia's Living Legends".

Bullion value: 18.29 USD Search tips
This value is given for information purpose only. It is based on a price of silver at 881 USD/kg. Numista does not buy or sell coins or metal.