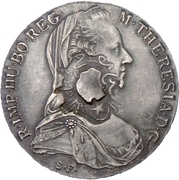 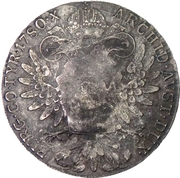 Translation:
Maria-Theresia, by the Grace of God, Roman Empress, Queen of Hungary and Bohemia
Cheikh Saïd in Ra's Bab al-Mandab

Translation: Archduchess of Austria, duchess of Burgundy, comtess of Tyrol

In 1868, a French company purchased the port of Sheikh Sa'eed and approximately 400,000 acres of surrounding land from the local tribe. In 1869, the purchase was annulled as the purchase price was only partially paid. At the end of the 19th century, the port was described as French, British, or Turkish territory, depending on the map consulted. The fort of Shaykh Sa'id was located on the border between Ottoman Yemen and the British Aden Protectorate at the mouth of the Red Sea. Considered a spurious issue, but with only about 10 known on this host.

Bullion value: 19.38 USD Search tips
This value is given for information purpose only. It is based on a price of silver at 829 USD/kg. Numista does not buy or sell coins or metal.