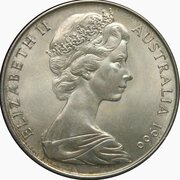 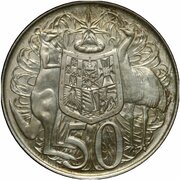 Australia coat of arms (the escutcheon is carried by a red kangaroo (Macropus rufus) and an Emu (Dromaius novaehollandiae)) and the numeral "50".
Designer's mark "SD" below.

This coin is extremely interesting, it is a pattern of Australia's round 50 cents coin from 1966 was only discovered in Sydney in August 2008. The revelation of it's existence, and an examination of the background to it's production indicates that there was an evolution towards the final designs that were used on Australia's largest circulating decimal coin.

The pattern 50 cents is one of between two and possibly nine such coins in private hands. In the early 1970's, it was rated equal to Australia's most desirable and historically important rare coins, and has a direct relationship to what is arguably the most controversial chapter in the history of the Royal Australian Mint (RAM)

The fact that the pattern has slight differences to those coins struck for circulation and inclusion in proof sets shows that the eminent British engraver and sculptor Arnold Machin used more than one plaster model during the production process of Australia's first decimal coins. Until now, the vast majority of Australian numismatists will not have been aware that more than one obverse type was in use on our national coinage between 1966 and 1984.

The pattern exhibits the following characteristics that are not seen on the coins struck for inclusion in proof sets or for circulation:
Obverse

Numismatic study of the pattern reveals the causes of the difficulty that RAM staff had in striking Australia's decimal coinage, as well as on the changes to the obverse and reverse designs that were introduced so the coin could be manufactured effectively.

Bullion value: 8.81 USD Search tips
This value is given for information purpose only. It is based on a price of silver at 830 USD/kg. Numista does not buy or sell coins or metal.