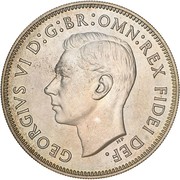 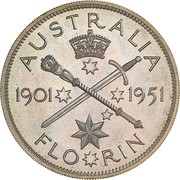 A pattern for the coin proposed to be issued to mark the fiftieth anniversary of Federation, 1901 - 1951. It was struck in London where the dies were prepared and struck with the standard fine British milling on a cupro-nickel blank.

A member of this site wants to exchange it: Ryurazu