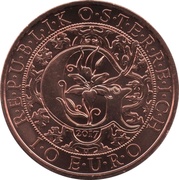 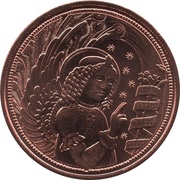 Angel Gabriel as a young man with curly hair and a halo, pointing his fingers to the sky, his wings decorated with peacock feathers.

The bringer of good news, archangel Gabriel is the inspiration for the second coin in the Austrian Mint’s talismanic Guardian Angels series.
Date of Issue: 6. September 2017
Comes from mint without packaging.

In the Koran, Gabriel is the guardian of the gate to heaven, the angel of revelation and the mediator between god and man. In the New Testament, Gabriel is the angel who told the Virgin Mary that she was with child and that the child should be known as Jesus. In a detail from a painting by an unknown 15th or 16th century painter, believed to belong to the German School, the coin’s reverse depicts Gabriel as a young man with curly hair and a halo, pointing his fingers to the sky, his wings decorated with peacock feathers. The centre of the obverse of the coin features a lily; symbolising Gabriel it is framed by the initial G, which is surrounded by a grapevine design.