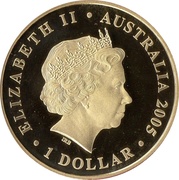 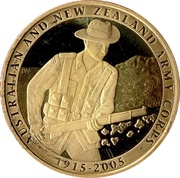 An Australian soldier wearing a slouch hat against a background symbolising ANZAC Cove (on the Gallipoli peninsula) in April 1915.

This coin is part of a 2-coin Proof Set released by the Perth Mint, together with a New Zealand coin commemorating the 90th Anniversary of the Australian and New Zealand Army Corps (ANZAC). It was released in a  folding coincard in a slipcase.

Front and back of the slipcase.