5 Dollars - Elizabeth II Century of the Battle of Beersheba 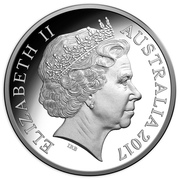 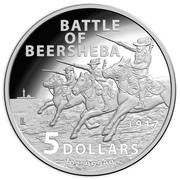 Century of the Battle of Beersheba

Three soldiers in uniform on horseback with their military equipment, each holding a bayonet. In the background, positioned above a horizontal line, a representation of a mosque

Marking the 100th anniversary of the Battle of Beersheba and honouring the courage and sacrifice shown during the charge of the Light Horsemen, a moving design has been portrayed in fine silver with a limited mintage of only 5000.

In 1917 Australian troops from the 4th and 12th Light Horse Regiments attacked Ottoman positions at Beersheba in one of the most gallant actions of the First World War. The bold engagement of Ottoman defences on this day has moved Australians for generations, this story now immortalised in books, many artworks, and even films. In 2017 the Charge of the Light Horsemen has inspired this very limited and highly detailed Australian coin for you to collect.

An uncirculated coin is also available.

Bullion value: 16.13 USD Search tips
This value is given for information purpose only. It is based on a price of silver at 569 USD/kg. Numista does not buy or sell coins or metal.