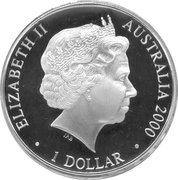 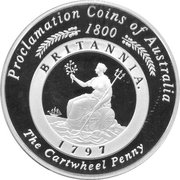 Released by the RAM in 2000 to celebrate the original Proclamation Coins of Australia introduced in 1800 with the first coin being the 1797 British Penny. The coin was released in a capsule in a plush case with limited edition certificate.

Bullion value: 29.08 USD Search tips
This value is given for information purpose only. It is based on a price of silver at 936 USD/kg. Numista does not buy or sell coins or metal.