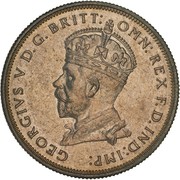 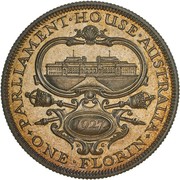 Translation: George V by the Grace of God, King of all the British territories, Defender of the Faith, Emperor of India

Parliament House within an oval frame set above crossed scepters. Superimposed on the scepters is a raised oval with the date 1927 incuse

This coin was struck to commemorate the opening of the new Parliament House in Canberra in 1927. 2,000,000 were struck and were first issued on 09 May 1927. It features a front view of the original Parliament House.

Bullion value: 8.69 USD Search tips
This value is given for information purpose only. It is based on a price of silver at 831 USD/kg. Numista does not buy or sell coins or metal.