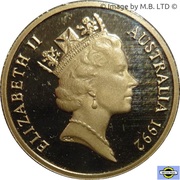 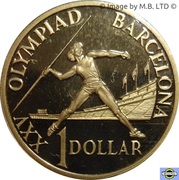 This $1 coin was issued as a NCLT coin by the RAM to commemorate the Summer Olympic Games (the XXVth Olympiad) which were held in Barcelona, Spain in 1992. This coin was issued without a mintmark but was available in a number of varying packages. The coin was included in the 1992 Annual Mint Set and the 1992 Year Proof Set.

It was available at the MYO (Mint Your Own) Gallery Press at the RAM for $2 when you visited the Mint in Canberra. It was issued in a wallet depicting the RAM building. These were then replaced by wallets with a picture depicting the Olympic rings. The illustrated wallets were also issued at the Sydney Royal Easter Show. 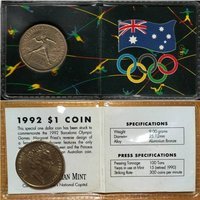 A  proof version was also released in the "Women in Sport" edition in a capsule.

It was also issued in the 1992 re-strike set of the first 5 one dollar Australian coins.

Sterling Silver (.925) versions of the coin were issued in two different plush boxes. One was a square box with interrupted edge reeding, the other was in a rectangular box with fully milled reeding.