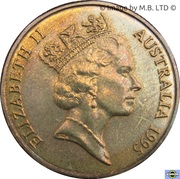 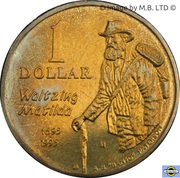 Stylised image of the Jolly Swagman from the song Waltzing Matilda, replete with a swag and walking stick, dressed roughly.

To celebrate the Centenary of Banjo Paterson's song "Waltzing Matilda" the RAM released this NCLT coin in 1995. The coin was available with a "C" mintmark at the public gallery press at the mint for a cost of $2. It was also available from a portable press at each of the Royal Shows in Brisbane, Melbourne & Sydney with "B", "M" & "S" mintmarks respectively. The image shown above is a Melbourne mintmarked coin. 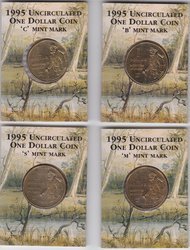 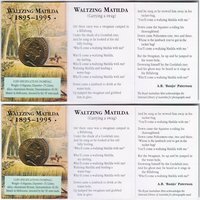 Two Silver Proof versions of the coin with different edge milling/reeding were also released in 1995.

The song, Waltzing Matilda is best known as the unofficial anthem of Australia (our official anthem is Advance Australia Fair). A bush ballad orginally penned by famous Australian poet Banjo Patterson tells the story of an intinerant drifter known in Australia as a swagman. Carrying his worldly possessions and bed (his 'swag') on his back he steals a sheep to eat and rests under a tree for a cup of tea and to eat the stolen sheep. Policemen and the sheep's owner arrive to arrest him but rather than accept capture the swagman throws himself in a nearby water hole (a billabong) and drowns, he then goes on to haunt the location.