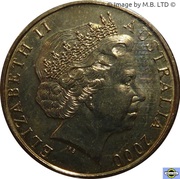 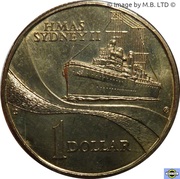 Image of the warship "HMAS Sydney II" above waves Denomination below 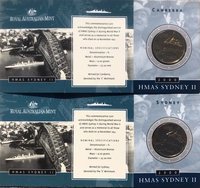 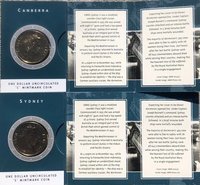 At a special function at the launch of the namesake of HMAS Sydney II official figures mention that 2,922 coins were also issued using the Mobile Press with a "S" Mintmark. However only around 300 were actually handed out placed in a special VIP Folder. The remainder were destroyed.

The RAM also issued a Fine Silver (.999) version in limited numbers in a capsule held within a plush square box.

On 19 November 1941 the HMAS Sydney II sank after heavy combat action with the German auxiliary cruiser Kormoran. The Sydney, the second such Australian ship to carry the name, sank with the loss of all 645 crew. It is the largest Australian naval loss on a single Australian warship and was the largest loss of life on an Allied ship in WW2 where all hands were lost. The exact circumstances of the tragic loss remain unclear to this date, and it was only in March 2008 that the wrecks of both the Sydney and Kormoran were located off the coast of Western Australia after many years of fruitless searching.