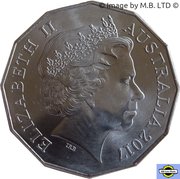 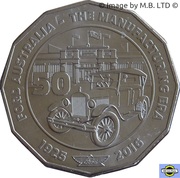 Image of an Australian built Model T Ford in front of the original Ford factory in Geelong Victoria. Australian Flag flying from the centre of the building set in an inner circle. Wording surrounding the circle with original Ford Logo below

This particular coin is the twelfth in the series. It commemorates the Manufacturing Era of Ford Australia which began a motoring legacy that ran from 1925 in Geelong, where the Model T was produced, to 2016 in Broadmeadows when Ford Australia built the last Falcon Sedan (an FGX), in October of 2016. Thus bringing to an end 91 years of Ford manufacturing in Australia. Which also saw one of the world's longest-running nameplates, The Falcon, come to an end.