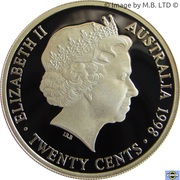 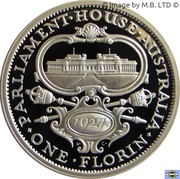 Masterpieces in Silver - Coins of the 20th Century

Parliament House within an oval frame set above crossed scepters. Superimposed on the scepters is a raised oval with the date 1927 incuse

This NCLT Fine Silver (.999) NCLT coin was released as part of the 1998 Masterpieces in Silver set ("Coins of the 20th Century ") which contained eight twenty-cent/florin sized coins and a pre-decimal crown.

The reverse of this stunning coin is a replica of the original 1927 Old Parliament House Commemorative Silver Florin, however the obverse has the 1998 Ian Rank-Broadley fourth Portrait of Queen Elizabeth the Second.

Bullion value: 11.35 USD Search tips
This value is given for information purpose only. It is based on a price of silver at 850 USD/kg. Numista does not buy or sell coins or metal.