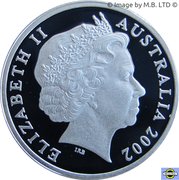 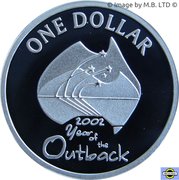 Lettering:
ONE DOLLAR
2002
Year of the Outback

This NCLT Fine Silver (.999) Proof coin was released by the RAM to celebrate the "Year of the Outback" in 2002. It was issued in a capsule placed inside a plush grey square box with a numbered certificate.

The year 2002 was designated as the "Year of the Outback", to celebrate that part of Australia that is so internationally famous (but actually lived in by very few Australians). With more than 7000 activities held Australia wide during the year the RAM decided to cash in on the event by releasing the 2002 Year of the Outback dollar.